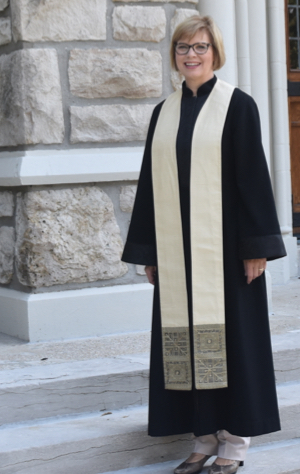 In April 2017, the Congregational Board of Country Club Christian Church called Rev. Carla Aday as the church’s eighth Senior Minister.

Rev. Aday has served the church since 1988 in various capacities, most recently as the Executive Minister in charge of administration, finance and stewardship in addition to preaching, teaching and planning. As the Senior Associate Minister from 2004-2014, her responsibilities included developing mission partnerships, adult spiritual formation, leadership development, ministry planning and staff supervision. When she was hired in 1988, she was the church’s first female minister.

Rev. Aday holds a Masters of Divinity degree from Yale University where she was honored with the Mersick Prize for effective public address and preaching. She is an experienced teacher and trainer, holding licensing and certification with various curricula.

She has led 20 mission trips both internationally and domestically, including trips to Nicaragua and India. She is a member of the Association of Disciples Pastors in Theological Dialogue, past member of Clergy Spiritual Direction, and has previously served on the Administrative Committee and General Board for the Christian Church (Disciples of Christ), as Moderator of Greater Kansas City Region of the Christian Church, on the Homeland Ministries Board, as a board member of the Girl Scouts – Mid America Chapter, and as a member of the MORE2 Clergy Caucus.

She has served as a volunteer at Della Lamb Community Services, Argentine Middle School, Notre Dame de Sion School, Habitat for Humanity, and Marillac Center for Children. In 2017 she spent one month as a volunteer at Mediterranean Hope, a project working to address the dramatic refugee migration by sea from North Africa, sub-Saharan Africa and the Middle East towards Italy.

Rev. Aday was the recipient an Eli Lilly Clergy Renewal Grant for a 2002 sabbatical program in Great Britain, has conducted independent study in theology with professors from Yale Divinity School and St. Paul School of Theology, has competed a writing course with Yale Divinity School, and has written and contributed to numerous publications.

GIVE
Toggle the Widgetbar