We are a diverse group, your emissaries from Country Club Christian to South Africa. There are 14 of us in all, seven who’ve been on the trip before, and another seven of us who have no idea what we are in for.  I was ready for some fresh perspective and a break from my busy life as an attorney, and it seems I wasn’t the only one…  – there are four other attorneys (or recovering attorneys) on the trip – much to the dismay of the sangola, a native Xhosa healer, that we met this afternoon!  We are also four clergy strong with Glen, Sue, Mary Linda, and Dale in tow, and then a few other occupations are represented.

Our trip began before dawn on Saturday morning, and just 31 short hours and approximately 10,500 miles after leaving Kansas City, we arrived safely into the care of Jon and Dawn Barnes in East London, South Africa.  Other than a little difficulty sleeping by some, the trip went off without a hitch.

Our meeting last night was brief – maybe Nancy Lear could tell by the glazed look in our eyes that not much of what she said would sink in?  We were warned to avoid the monkeys on the beach that is within walking distance of our lodging, and Julia managed to ask “How big are the monkeys???”  And then we all ventured to our lovely rooms with the most lovely showers and lovely beds I have ever seen.  It seems a 15-hour plane ride had already given me fresh perspective!

Today, the Barnes’ friend Velile took us on a tour of East London and the surrounding townships.  One look at a home made of scraps of tin, side by side with thousands just like it, and when realized just how far from home we had really come.  Velile estimates that about a quarter of the township has HIV/AIDS.  The highlight of my day was a visit to a local elementary school – made up of three small classrooms and one well-used playground.  Before we had even exited the bus, we heard the chants “Teacher, teacher!,” the name used for all visitors.  Approximately 100 schoolchildren filled a room about 25 x 20.  Our hearts were filled as we received one embrace after another from children who found no greater joy than having their picture taken by us or having the opportunity to serenade us with familiar tunes like “If you’re happy and you know it” – with a bit of a South African twist.  The cost to attend is about 25 rand (approximately $2.50) per month, but nevertheless, some children do not have this opportunity. 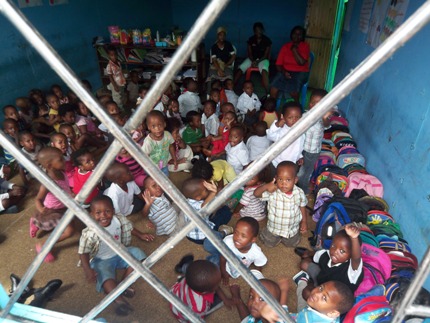 We dragged ourselves out of the door and across the way to a local “brewery.”  Almost everyone tasted the frothy, milky brew, made of boiled sorghum and cornmeal that had rested for four days, and then had the corn strained off of it.  They don’t add any yeast – it’s an “all natural” fermentation process.

Next we were onto a multitude of other experiences, namely (as Velile says) the four “T’s” of the township – telephones, taxis, taverns, and tents.  The telephones occur in the form of large red boxes every half mile or so, taxis like the 20-person bus we were riding in, tents used for weddings and funerals, and, well, I’ll get to the taverns here in a bit.

Next up was a market where we tasted fresh pineapple carved right in front of us, and then onto the most exciting new destination in all of East London – the shopping mall (for a restroom break).  We moved onto a visit with the local sangomas who sang for us and explained their training and kindly sent us off with a song saved for special occasions to keep those who are traveling safe on their journeys.  We are attempting to send a recording of the their music recorded by Rod on his phone – I hope you enjoy it as much as we did! Just close your eyes and imagine faces painted all in white, sticks from trees with medicinal powers, and bright, colorful beads wrapped around the sticks and the necks of the women the whole township sought out for a cure for anything from a stomachache to HIV/AIDS.  In the latter case, the sangomas send the patients onto the clinics for some additional help from Western medicine. 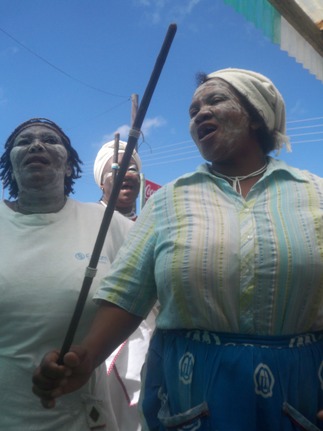 We ended the tour with the final “T” – tavern – with a beer and some “samp and beans” (corn, carrots, and beans with gravy).  As Velile says, move to East London with no friends, spend a day at the tavern and make a friend out of your tablemate, and so on and so forth, and you’ll know the entire township by the end of the month!

Signing off for the day – we have braai (barbecue) at John and Dawn’s to attend – but thank you, or enkosi (Xhosa) or dankie (Afrikaans) for allowing the 14 of us to be the face of the Country Club congregation for the next two weeks!