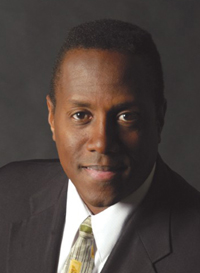 On Jan. 7, I was leaving the 10:00 a.m. Chapel service, having participated by playing for Kevin Briggs’ offertory solo. I was feeling quite good that morning. It had snowed, but everything had been taken care of by the facilities crew. I was walking on what seemed like a perfectly cleaned brick walkway. As I walked away from the chapel, I was singing along with the Doxology while thinking about rehearsal with the Chancel Choir. In a split second I became aware that I was airborne. I did not notice the patch of ice, and I only had time to tuck my head to keep it from striking the walkway. I hit the ground with such force that it felt as if I had fallen from a much higher elevation. In seconds, J. J. Jones was standing in front of me asking “What can I do?” He helped me to my feet and soon I was on my way to the hospital. At the hospital I found out that I had five broken ribs but no damage to any internal organs.

After spending two and a half days in the hospital I was released, but not before being visited by my church colleagues. As I recuperated, I was told that the members of the various music groups at Country Club had arranged to prepare and deliver meals. I had visits from ministers, musicians, and church members. I did not know that such a thing as a meal chain existed. I was very appreciative of the effort by so many friends to help me in my recovery. I know Vicki was even more grateful for the help taking care of such a miserable patient.

After what seemed like a lifetime I was able to return to church. I am so thankful for those who filled in for me when I could not be there. Tepring Crocker filled in beautifully and led the Chancel Choir, Dina Evans kept me informed, and Carla Aday brought me a recliner when I did not want to lie in bed anymore.

On Apr. 15, more than three months after my fall, I returned to the Chapel. The same church family that had cared for me during my convalescence welcomed me back. I have had an up-close view of a truly caring church family. I thank everyone who assisted me, prayed for me, and wished me well.

I must also thank Lara Schopp for suggesting I write about this experience. I did not know it then but writing about it has been therapeutic for me.